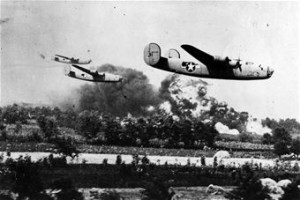 Kits. All Ploesti B-24s were the early D model with the glazed “greenhouse” nose. To my knowledge, three B-24D kits have been produced: 1/72 offerings by Minicraft and Revell, and Monogram’s 1/48 effort. Of the three, Minicraft’s B-24D is the most recent and the best, having delicate recessed panel lines and good interior detail. It has good fit and accuracy, aside from the four tail formation lights that are for some reason molded on the elevators and must be moved to the fixed horizontal stabilizer. The large Monogram kit is much older but nevertheless has delicate raised panel lines, good interior detail, and overall accuracy, which can be improved further with a turret set from Koester Aero Enterprises. The major drawback of this kit is that it is currently out of production, although you should be able to get one through vendors or club members with connections. Age has been less kind to the Revell release, which is a modeling dinosaur with its softball-sized rivets, lack of detail, and crude molding. In addition to these B-24Ds, four kits of the later turret-nosed H/J models have been released: 1/144 Minicraft, 1/72 Minicraft, 1/72 Airfix, and 1/48 Monogram. As these would require a major, though straightforward, conversion to D standard, they shouldn’t be considered unless you build exclusively ‘in 1/144 or can’t find Monogram’s B-24D.

Scheme. Aircraft detached from England (the 8th USAAF’s 44th and 93rd BG) retained their standard European scheme of ANA 41 Olive Drab (FS ‘34087) upper surfaces with ANA 43 Neutral Gray (FS 36173) lower surfaces. Most Liberators carried blotches of ANA 42 Medium Green (FS 34092) on the OD horizontal surfaces and outer fins and rudders. Most aircraft assigned to the 9th USAAF (98tb and 376th BGs) had their upper surfaces repainted in ANA 49 Sand (FS 32079). According to Newby’s book, The 8th USAAF’s 389th BG was sent directly to the desert from training and received the Sand upper color in the U.S, though it’s possible that some of these had the 41/42 upper surfaces as well. Along with the Sand upper color, some bombers received RAF Azure (FS 35231) lower color. (NOTE: SuperScale sheet 72-024 describes Sand as FS31433, which is very close to 32079. In general, modelers should take FS numbers only as a crude starting points; since they do not account for scale effects and weathering, they usually require much lightening and some graying to produce accurate looking models.) The upper and lower colors had a soft demarcation (4″-6″ actual size overspray) set low on the fuselage.

Insignia. The summer of 1943 was a time of change for the U.S. national insignia. A simple Insignia White star in an Insignia Blue disk had been used since 15 May, 1942. For desert-based aircraft, this was usually outlined with a yellow border. Directive AN-1-9a, dated 28 June, 1943, added IW side bars and outlined the whole with a thin Insignia Red border. This was amended by AN-1-9b on 14 August, 1943, which stated that the IR border was to be replaced with IB. In theory, the I August raid should have found all aircraft with red-bordered star-and-bar insignia, but this was not the case. It seems that the 9fli BC Liberators carried this new insignia (often with the wider yellow surround showing as an incomplete “superborder”), but raiders from 8th BC retained the simple star-in-disk insignia (dulled and “grayed”), with those of the 93rd BG (but not the 44th) outlined in yellow. I have no photos of the 389th, so its insignia (and scheme) remain a guess. One universally applied marking was an RAF-style fin flash painted on both inner and outer sides.

Decals. Five 1/72 and four 1/48 decals sheets include markings from the five Ploesti BGs, though not all are from the time of the raid. Aeromasters 72-025 provides markings for Johnson’s “Suzy Q” (44th), Kane’s “Hail Columbia” (98th), and Compton’s “Teggie Ann” (376th) at the time of the raid, plus “Jerk’s Natural,” a 93rd BG depicted after it’s transfer back to England. These are generally correct, except (1) the 9th BC machines should have the updated red-bordered (and, for Kane’s at least, yellow “superbordered”) insignia, and (2) Suzy should have a yellow, not gray, aircraft letter (L). Sheet 48114 contains “Hail Columbia” and “Teggie Ann”; 48115 has “Suzy Q” and “Jerk’s Natural.” SuperScale offers markings for five aircraft on four sheets: “The Witch” (98th) and “Strawberry Bitch’ (376th) on 72-024, “Chug-a-Lug” (98th) on 72-280, “Ripper the 1st” (376th) on 72281, and a 44th BG machine on 72-574, which I have not seen. “The Witch” (lost on the raid) carries accurate raider markings, except that it should have narrow C-Type fin flashes, not the wide A-type shown. “Chug-a-Lug” provides accurate markings for the spring of 1944. The two 376th Liberators show a curious mix-up: “Strawberry Bitch” carries raider insignia but later tail markings, whereas “Ripper the 1st carries raider tail markings but later insignia, including a nifty faded disk within a dark IB border. Sheet 48-265 includes “The Witch’ and “Strawberry Bitch”; 48-340 includes the unknown 44th BG machine.