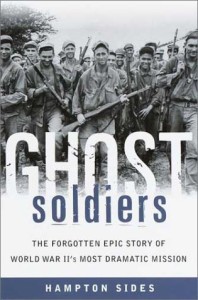 One of World War II’s saddest chapters is the defeat and surrender of the United States forces in the Philippines in early 1942, and the horrors those men suffered.

Wracked by disease, short on food, medicine and supplies, the “Battling Bastards of Bataan” and the defenders of Corrigedor were doomed from the outset. With the battleships of the Pacific Fleet smoldering on the bottom of Pearl Harbor and the Japanese Naval and Air Forces dominating the sea and skies, there was no way for supplies and relief forces to get to the Philippines, as called for in War Plan Orange.

In early April 1942, the American and Filipino forces on Bataan had only one option – surrender. Instructed by their commander, General Homma, to treat the captives humanely, but to clear them out of southern Bataan as expeditiously as possible – to allow him to mass his forces for the final assault on Corrigedor – the Japanese were expecting to have to deal with 25,000 to 40,000 Prisoners of War. Instead, they found themselves with some 100,000 sick and malnourished captives.

Under pressure to move the captives out as fresh troops moved in to the southern tip of Bataan, the Japanese troops and their local commanders panicked as the sickly captives were unable to sustain a forced march with no food or water. What unfolded was the infamous “Bataan Death March”, in which thousands of American and Filipino troops were murdered. In May, Corrigedor fell, and those who manned “The Rock” went into captivity as well.

By late 1944 and early 1945, the tide of war had turned. As the Americans closed back in on the Philippines, the Japanese began to look the remaining POW’s with a menacing eye. In January 1945, 150 prisoners were burned alive in makeshift air raid shelters in a place called Palawan, in the Philippines. The Japanese were determined that no POW’s would be liberated.

As the US Sixth army pressed south from Lingayen Gulf towards Manila, the story of the Palawan massacre came to light. The American’s knew that several hundred survivors of Bataan and Corrigedor were languishing in Cabanatuan Prison camp. The problem was, the American’s were driving south to Manila, and the prison camp was to the west of their line of advance. So, a plan was hatched for a reinforced company of Army Rangers to slip thirty miles behind enemy lines and liberate the POW’s from their hell on earth.

Ghost Soldiers, The forgotten epic story of World War II’s most dramatic mission, is the story of that raid. But it’s more than a story of the Rangers mission. It’s a story of courage and sacrifice and survival.

Let me say this: author Hampton Sides can write. The book – a true story that reads like a novel – is masterfully written and paced. Sides truly paints a picture and brings the events vividly to life:

“Late afternoon was taking on the complexion of dusk. The sun’s rays slanted low through the high grass and the temperature began to drop from the infernal to the merely intolerable. A gusty breeze made a constant play of swirls and ripples in the cogon, as though a distracted artist were beginning whimsical thoughts and ending them abruptly”

The books weaves the story of the raid with the story of the prisoners, from surrender through the horrors of the Death March to the harsh cruelty of captivity, in alternating chapters, until events begin to merge in late January 1945.

I’ve always been fascinated with the Philippines campaign, the defense of Bataan and Corrigedor. Maybe it was growing up watching movies like “They were Expendable”, “Back to Bataan” or “Bataan” that piqued my interest.

Sides’ book is an important contribution to the story of the defeat suffered and victory achieved in the Philippines. It may be the best book I’ve ever read about World War II. I highly recommend it.