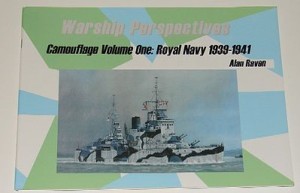 Camouflage – to disguise something – has been something man has been trying to perfect since the dawn of time. The German’s brought it to an art form during World War II, especially on the equipment of the Werhmacht and Luftwaffe. On the Naval side, camouflage was widely used by many navies, but especially by the United States and Royal Navies in both the First and Second World Wars.

The United States laid down rules and regulations on the subject of camouflage (down to the reflectance used in the paint), and Floating Drydock produced two excellent books on the subject. However, there hasn’t been any good references that I have found for the Royal Navy, outside of some articles published in the now defunct Plastic Ship Modeler, or small sections in books on the design and history of battleships. 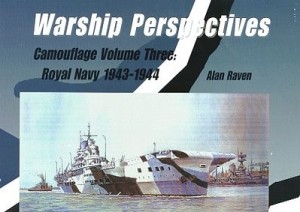 Alan Raven has corrected this with his our volume series of Warship Perspectives on Royal Navy camouflage:

Each book is 56 pagers long, with approximately 150 profiles per book. Due to cost constraints, only about 7 pages in each book have the profiles in color. However, there are color chips on the back cover of Volume 1 and Volume 3 which are easily referenced.

Volume 1 covers the years 1939 to 1941, when camouflage was applied to ships seemly by whim, with no rhyme or reason. There were very little official schemes or designs, so it was up to the yard building/working on ships, or commanders of ships and squadrons to decide what camouflage to apply to what ship.

There is a lot of art work in these books, and a lot of material to take in. Some interesting things I’ve found is that unlike the American dazzle schemes, many British designs were identical on each side of the ship. Maybe now I can build that 1/700 HMS Barham I’ve been putting off, since I couldn’t find a match picture of the port side camouflage. Additionally, past references had indicated that the HMS Repulse and HMS Royal Sovereign were painted in a two two scheme of light gray and dark blue or dark gray. They are actually in a light gray and BLACK…glad I found this out before I started building these models! 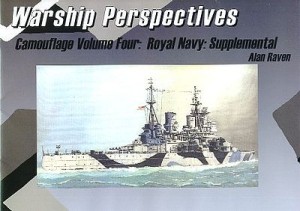 Volume 2 covers 1942 only, when the Admiralty started to come out with dedicated “Admirality Disruptive Patterns”, and the unofficial patterns started to disappear. 1942 also saw the introduction of the “Western Approaches” scheme for destroyers, frigates, etc. Those schemes are covered in great detail in Volume two.

By 1943, almost every single Royal Navy ship, from Battleships down to dinghies were in some sort of camouflage. Ships were wearing either Admiralty disruptive for the big ships (cruisers and larger) and Western Approaches or Emergency Fleet scheme for destroyers and other escorts. This is the focus of Volume three. There is extensive coverage of RN escort carriers built in the US and of the changes in schemes for cruisers. Volume 4 ties everything together, where “an attempt has been made to cover some of the designs for which there was no room in the previous three” volumes. This volume also covers camouflage for landing craft, and has a series of views of the fronts and backs of bridges, turrets and hangars to match the side view of camouflage patterns found in the earlier volumes (ship modelers familiar with USN camouflage design sheets will be familiar with these types of views). 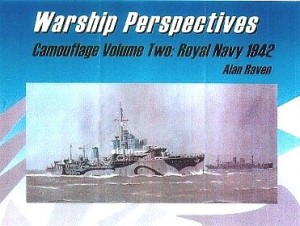 It is unfortunate that the entire books are not in color, but as the author said, cost was the deciding factor. The profiles of the smaller ships are in greater detail, while the profiles of the Battleships are quite simple in cases, some only being the shape of the ship with the camouflage drawn over that.

Raven states that the Royal Navy was “the biggest user of seagoing camouflage in the Second World War”, so it’s good to see these books come to market. If you are interested in camouflage, or planning on building any of the many models of Royal Navy ships available, then you should get these books. I highly recommend them.