During the preceding months before World War 2 the British Admiralty realized that it had a shortage of convoy escort vessels so a design was approved that was based on a merchant-whaling vessel. The Flower class Corvette was designed so that merchant shipyards that where not ordinarily utilized for wartime production would be used to produce them. The power plant was designed so that no special training was needed to maintain or repair them and most replacement parts could be made at a local metal workshop. The Flower Class Corvette was used in every theater of the War but is mainly remembered as a workhorse in the Battle of the Atlantic. The kit I am using is the 1/72nd scale Flower Class Corvette by Revell and my main point of reference is the book by Warship Perspectives, Flower Class Corvettes in World War 2 by John Lambert. The ship I decided upon was the H.M.C.S. Snowberry as she appeared after her refit in May 1943, but she can also be built as she appeared before this refit with a shorter focsle and the mast forward of the bridge.

The first thing you will notice when you are building this is the immense size of the kit. This thing is huge! If you thought the 1/350th scale Bismarck by Tamiya is big, well guess what, that whole kit as built will just about fit into just the hull of this little darling. The second thing you will notice upon starting assembly is that you will need a lot of glue and just as much putty. This is definitely an old kit that will need a lot of work but still can be made to look nice just out of the box. There are many after market detail sets available from overseas so much so that one manufacturer claims the only thing you will need out of the kit is the 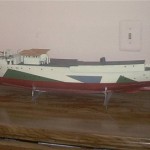 hull. For this build I wanted to try to keep it built as out of box as much as possible with a few minor corrections and replacing of kit parts.

Construction started with the hull of course and the first step was to remove the molded on Keel block that is molded on the whole length of the ship. On the real ship the keel block came from the bow and extended straight down and was blended into the hull bottom. The ships rudder shaft was drilled out to accept a 1/8th inch brass rod, I do this to add strength to this obviously weak area, there have been to many times when I broke off a rudder by barely touching it. While the hull was drying I started to remove the modeled wood planking on kit parts C1 and C2. The deck on these ships were mostly metal plate, except for the bow section starting just aft of the breakwater. I would also strongly recommend that you reinforce kit Parts D1, D2, D4, D8 and D9, not only do these part keep the hull from flexing in and out but also support the main deck so either use a long piece of sprue or better yet just superglue a metal rod on each side of these pieces. It would also be a good idea to replace the propeller shaft at this time; once again I drilled out the appropriate pieces for a 1/8th inch rod. Yes you do have to reinforce a lot in this step but it will be well worth it later on in assembly and any time that you transport the ship when you are done with building it.

The hull is broken down into four halves so I decided to glue the two Port (left) side pieces and the two starboard sides together so that I can have as good a seam as possible there and work on filling the gap that resulted down the middle of the two halves. This turned out to be just about the best way of doing this but resulted in a gap that I could not get out at the very stern of the ship, but lo and behold when looking at the directions I found out later on that is right where a support beam goes. All horizontal decks where to be painted neutral gray so this was done, as was the natural wood deck at the bow of the ship. The hull was painted a dull white by using Polly scale flat white mixed with a little dirty white to tone this down a little. The camouflage colors I used where US intermediate blue A/N 608 and RLM 83 light green lightened with flat white, now before anyone has a conniption about what colors actually belong let me say this, I went by the old tried and true standard of “yea that looks about right” so live with it. I also used Polly scales red (RLM 23) darkened with a little flat black once again using the same color standard. I have a picture that shows this ship sitting in port riding high and you can see that there is no black boot separating the camouflage color and the anti-fouling coating so this was left off.

The instructions don’t really say so but they do give you parts for two different gun houses for the 4-inch gun. I decided to use the early square gun housing and also decided to open 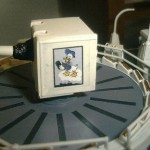 the forward view ports. In order to replicate the blast bag I used a tissue soaked in Elmer’s glue and shaped it with a putty knife and a #11exacto blade. . After this was dry I touched it up again with Elmer’s glue. I am using decals made by a man by the name of Bob Pearson who has made these on his Alps printer. The kit decals for the gun housing are pretty sorry looking but the ones I received from him where definitely worth more then I paid and I cannot recommend them enough. Included in the purchase price are paint schemes for 11 different Flowers and also full size templates for converting this kit to any of the 11 different ships including short fo’c’sle Flowers. He also has an excellent site that you can visit on the net for articles on how he built his ship and a lot of pictures and very good information at www.cbrnp.com/RUN/flower. For the deck on the gun platform I used masking tape cut into 16 thin strips painted grimy black to represent the non-skid strips and put these in a circular pattern around the assembly. In this scale it looks like a good representation. The instructions also say that the ammunition holders don’t go completely around the base but according to my pictures of the Snowberry they do, so that is how I assembled mine. The vents that come with this kit look like big pieces of macaroni so I hollowed out the face of 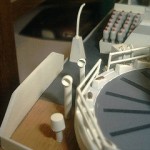 each with a drill and then shaped that with a Dremel to make it appear more realistic. Using a ball of twine, I cut a small piece and then separated that in half lengthwise and starting on one side of the cable reel wrapped the twine around until the spool was full then superglued and painted it grimy black.

When building the bridge if you follow the directions it will tell you to build up the sides on a flat piece of wood or suitable surface, I have heard of many complaints about this and come to find out what you want to do is actually build the bridge upside down on a flat surface. This will result in the top being flat and the bottom to conform to the shape of the deck. There isn’t any really pronounced slope to the deck but it is there and if you flatten out the bottom you will just have to fill it again later. All the storage lockers needed at the very least sanding and filing, for those who wish to do so it might be easier to scratch build these. When assembling the hedgehog assembly the blast board towards the rear is supposed to sit flush with the deck so I just removed the molded on locating line and glued it to the deck. It is a little confusing to see but kit parts M1 and M11 when assembled go on the bottom of part D14, when I was test fitting mine I was wondering why it fit so well compared to every other assembly, then I noticed that I was mating them wrong and that solved that little dilemma. I am trying to remember that this is an old kit and it is a lot of fun to build but it suffers from a lot of sink marks and gaps so just be aware that if you want to fix them all you will be spending a lot of time filling and sanding. You can help yourself sometimes by looking ahead in the instructions and seeing what’s next in the assembly and skipping a few steps. For example I glued parts E7, G4 and G55 together, then glued this onto the upper part of the bridge so that I could have at least 3 good seams and fill 1, which is better then if I glued it the way I would have if I followed the instructions. (See, that’s why real men don’t follow directions, we know better!).

The 20 MM guns that you receive as is are laughable, but once again trying to use as many kit parts as possible I drilled out the barrel, reshaped the ammunition boxes, added gun sights from my spare’s box, added spent cartridge bags, added recoil springs, and replaced the shoulder supports. This was accomplished by removing the molded on support then using wire to shape the supports. The blast bags are duffel bags that I cut in two then added to the bottom. The recoil springs where made by taking a normal piece of electrical wiring stripping off the outer plastic grabbing 1 piece of the copper wire and wrapping it in circles around a like size drill squeezing this together and gluing them onto the barrel of the gun, it sounds more difficult then it actually was and made the guns look pretty good or at least better than before. 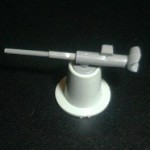 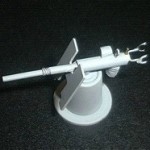 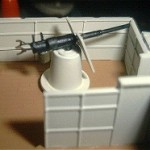 Moving onto the upper bridge assembly do not hollow out kit parts k44 these are voice tubes; these had a flapper over the top when not in use. I removed the top to the compass platform and pinnacle and using instrument decals from my spare box I placed these on and used Elmer’s school gel to replicate the glass covering. The type 271 radar platform has dimples molded onto it, these where drilled out. Once again the kit doesn’t say so but they do give you two different lantern designs both early and late. Using the pictures I have I will be using the early style. After test fitting the upper part of the radar housing I noticed that unless you remove the molded on locating lines that piece will be off center so I used the holes that I drilled into the platform to guide me when it came time to glue that piece on. The Clear plastic window’s for the radar housing was worthless because they didn’t even come close to fitting right so you have the choice of either replacing these or just throw some canvas colored tissue over the whole assembly and be done with it. Me unfortunately I decided to try to make my own windows. The signal flag storage locker looked pretty dumb as is so I went ahead and made a copy of the signal flags given in the kit reduced them a little bit folded them in halves until they where small enough to shove inside each of the compartments. This helped out the overall look of this piece and the bridge.