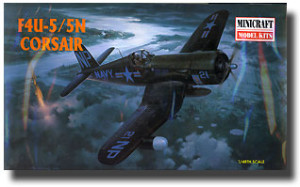 Having just finished the MiniCraft F4U-5N kit, I have to make a stunning statement — the kit is not all that bad!! It is NOT a “piece of crap” as many have said. It is certainly not up to current standards as packaged, but it is not the epitome of polystyrene cow dung either. Of course, there were changes made to make this kit more accurate:

2. The very nice TD F4U-4 cockpit can be fitted with a little work

3. The “chipmunk” cowl intakes have to be thinned out.

4. The rudder should be cut out and repositioned.

5. A new windscreen from squadron and canopy (hand thermoformed from putty built-up master using the canopy in the kit) should be fitted.

6. If you want, replace the anemic struts with ones from Hobbycraft kits – this was based on my own sensibility of the corsair’s gear.

7. The prop, due to molding problems, needs to be filled and sanded (briefly) into shape.

8. You have to hand build flash suppressors from card stock.

— All these mods took me less than 2 hours.

All this having been said, the kit does have a good engine, generally accurate, fairly subtle panel lines (far better the Hase -4’s panel lines), very nice wheel well detail (better than any kit outside the Tamiya -1) and most importantly, captures the general shape, length and “nose down” attitude of the -5 (much more than can be said for the Italeri 1/72 F4U-5N). With more sanding and filling than the typical Tamigawa kit, it actually assembles very quickly and easily.

I have to admit when I saw the model in the box, I was sorely disappointed. As a dedicated Corsair fan, I was surely exasperated by what looked like a toy in the box. But I got it for less than $10 and I couldn’t turn down a model I had waited for so long. But those first impressions were based on things like the horrid wheels,cockpit, weird gap in the vertical stabilizer, and the clearly wrong canopy — all things easily replaced in this day and age. The problem with the in-box reviews (of course I KNOW as has been repeatedly noted here, you can choose to ignore them — how many really do?) is that people may never check out the model for themselves (I almost didn’t even look at the -5N) if negative enough emotions are conveyed in a range reviews and comments that one reads.

Always check out things for yourself if a “bad” kit is one you really want to build — if I hadn’t done this, I wouldn’t have a very nice 1/48 F4U-5N (VC-3 no.6 “bolt” scheme — didn’t use the Bordelon decals) sitting in my case right now.