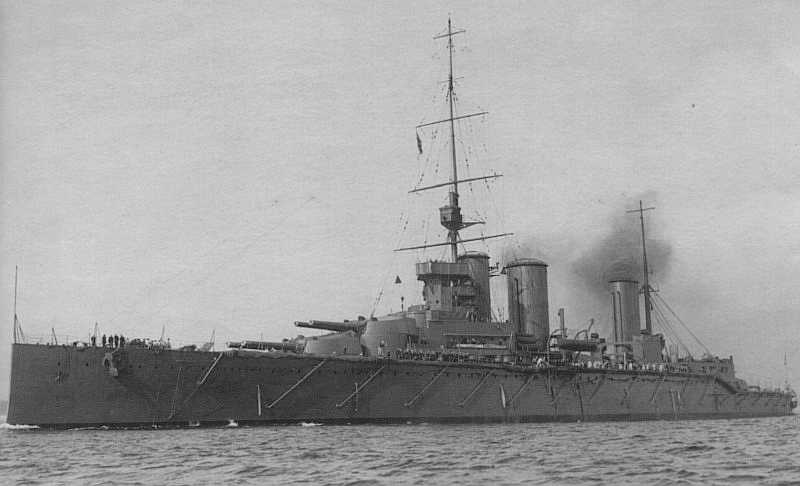 Operational History
The Queen Mary began life as the battlecruiser allotted to the Royal Navy’s 1910-1911 building program. Laid down in March 1911 at Palmers, she was launched in March 1912 and commissioned in September 1913. While listed in some publications as a one-ship class, she was very much a product of the preceding Lion-class, being slightly beamier, with a greater displacement and shaft horsepower, albeit with the same top speed of almost 28 knots.

The Lion’s were a major leap forward in British battlecruiser design, being the battlecruiser equivalent to the Orion-class battleships (with one less turret). The Lion’s were 110ft longer and 9 feet wider than the previous Indefatigable-class, with a 3 knot increase in speed, a 3 inch increase in the thickness of the armor belt, while carrying 13.5 inch guns in an improved turret layout.

When completed, Queen Mary appeared more like Lion after that ships 1912 refit, with a spartan bridge and pole mast. She differed from Lion and Princess Royal by eliminating the 4 inch secondary guns on the forward shelter deck, having a larger, rounded second funnel, by the addition of an armored torpedo director tower on her aft superstructure and by her stern walk, which her earlier half-sisters didn’t have. She also carried a different fire control system – the so called “Pollen system” – than her sisters.

Upon joining the fleet, Queen Mary joined the 1st Battlecruiser Squadron of the Grand Fleet, where she remained for her entire career. In August, 1914, she was part of the action in the Battle of the Heligoland Bight, but missed the Battle of Dogger Bank because she was undergoing a refit.

Late in the afternoon of May 31st, 1916, Queen Mary, along with Lion, Princess Royal, Tiger, New Zealand and Indefatigable, tangled with the German Battlecruiser force in the opening phase of the Battle of Jutland, the so called “run to the south”. The gunnery duel began around 3:40 pm, and within the first 15-20 minutes, Indefatigable had been sunk while Lion, Princess Royal, and Tiger had all been hit – Lion narrowly escaping destruction when Q turret was destroyed. Only the flooding of Lion’s magazines by a quick thinking officer in Q turret prevented the flagship from joining Indefatigable as a casualty of the battle.

Meanwhile, Queen Mary – who had the reputation as the best gunnery ship in the British fleet – was hammering the German Battlecruiser Seydlitz. It wasn’t simply a one sided fight, however. While the Queen Mary had larger caliber main guns – 13.5 inches compared to the German 11 inch guns – Seydlitz enjoyed an almost 3.5 inch advantage in side armor and a 1 inch advantage in thickness in her deck armor, and was scoring hits of her own on the British ship.

As the two opposing forces raced south, Queen Mary came under the combined fire of both Seydlitz and Derfflinger. Hit near ‘Q’ turret , then again near her forward turrets around 4:20 in the afternoon, the HMS Queen Mary blew up in spectacular fashion, leaving a large plume of smoke to mark her grave, and only 20 survivors out of her crew of over 1,000. Her loss prompted Vice-Admiral David Beatty to utter the famous remark, “There seems to be something wrong with our bloody ships today.”

The Model
I first saw the Queen Mary at the IPMS Region II convention in Virginia Beach in October 2006. My first reaction was, “Holy Crap, what the heck is this?” as I hoisted a very large piece of resin for a closer look. Having made their way through most of the American pre-dreadnoughts, it appears that Iron Shipwright is turning their efforts to Royal Navy subjects, picking up where they left off with HMS Invincible. I was quite impressed with what I saw of the Queen Mary at the show, and promptly placed a pre-order. Mine arrived recently in a study cardboard box, with the large hull wrapped in both bubble wrap and another pad for extra protection. 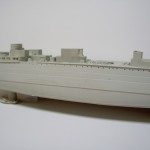 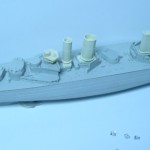 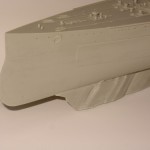 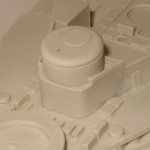 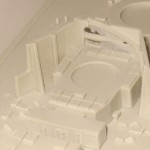 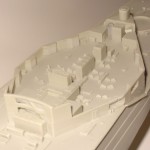 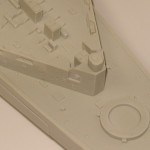 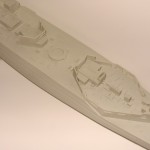 The hull is 24 inches long, which scales out perfectly with the Queen Mary’s overall length (sans stern walk) of 700 feet, and about 3 inches wide, which is very close to being in scale with her actual beam of 89 feet. Overall, the hull is very nicely cast. There are some ventilators and other small parts on the deck which have voids or holes, but those can be easily repaired. There are some air holes, a casting rib and two casting plugs protruding from the bottom of the hull. Again, these should be easy to clean up. The torpedo control tower on the aft superstructure is crooked on my kit, I plan to saw it off, sand the bottom flat and re-attach it. 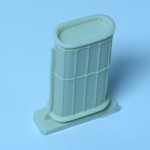 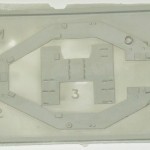 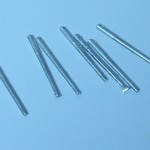 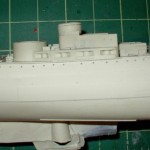 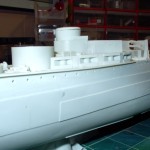 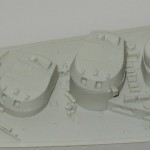 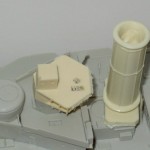 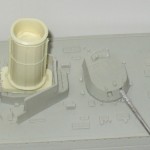 The turrets and funnels are well cast….though the opening for the aft oval funnel (which appears to me is from their Invincible kit) should be a little deeper, in my opinion. If you look at the depth of the two round funnels, you’ll see what I mean – those are more realistic. The 13.5 inch guns are white metal and will require a little bit of clean up, but all in all don’t look that bad (brass barrels are also available for this kit). It also looks like you’ll have to either drill out the turrets or cut the barrels, as they appear to be just a bit too long when fit into the turret.

The levels for the forward superstructure have some flash on them, but otherwise are very well done, while the deck for the aft superstructure is very nice indeed. ISW packaged this part wrapped with the photo-etch to prevent warping – a nice touch. 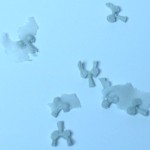 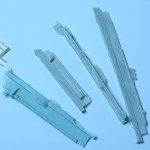 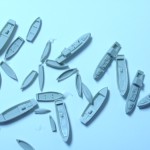 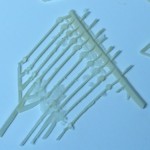 Other small parts include the struts for the fore and main masts, ships boats, torpedo net booms, and searchlights in resin, plus white metal anchors. The struts for the main masts are well cast, but you still may want to replace these with brass rod or tube if you are going to rig your model. The ships boats are the best batch of boats I’ve ever seen from ISW. In the past, as many as half the boats have been unusable, but these were well cast – a good sign. The booms for the torpedo net have some flash on them, and look quite fragile. Be careful with them, or replace them with brass or styrene rod. The searchlights Queen Mary carried were also well done in my kit, while the struts/shafts and rudders all seem up to par. Oddly, there were no props in my kit. 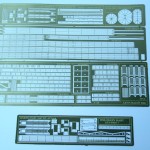 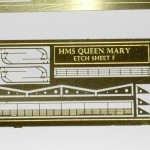 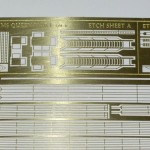 The photo-etch set that comes with the model is pretty extensive, and well done. I like how ISW etched the names of the fret into the brass. I’d like to see Iron Shipwright start moving into relief etching, which I think would bring their kits to another level. Even without relief etching, I have no complaints about the photo-etch, other than some of the parts could use a clear demarcation line to help make them easier to fold. 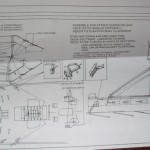 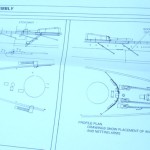 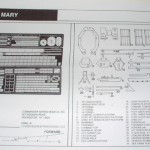 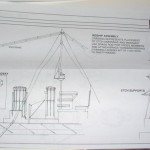 The instructions in some of the recent Iron Shipwright kits have left much to be desired. The instructions have ranged from ‘sparse’ to ‘worthless’, in my opinion. The instructions for the Queen Mary, while not being perfect, are much better than recent releases. I’d still like to see a plan and profile view to help get a feel for where parts go on the whole model, but these instructions are definitely an improvement. Let’s hope that trend continues with their next release.

The overall kit is quite good, one that should build into a decent replica of this handsome, if tragic, warship. I think ISW is on the right track with their overall quality. Hopefully we’ll see some more of Fisher’s Greyhounds in the future. Indefatigable, anyone?

The Verdict
Recommended. The Queen Mary retails for $349.95. I bought mine directly from Iron Shipwrights.