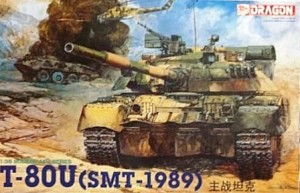 Someone once said to me that Soviet Armor should be built two ways: Fresh from the factory, or burned out . I disagree with this statement , So when DML came out with a model of the T-80 U, Russia’s premiere battle tank in 1/35th scale, I felt that now was the time to end this practice.

The overall layout of the T-80 is similar to that of the T-64 series with the driver’s compartment at the front, two-man turret in the center and engine and transmission at the rear. The T-80 uses the same horizontal ammunition system as the T-72 as well as the same 125mm 2A46 smooth-bore gun. It can fire either the At-8 “Songster” ATGW or 125mm ammunition . A 7.62mm PKT machine gun is mounted coaxially to the right of the main gun and a 12.7mm NSV machine gun is mounted on the commander’s cupola.

Standard equipment includes snorkels for deep fording operations, an NBC protection system, night vision equipment for all three crew members, unditching beam, a laser warning device, laser designators or precision-guided munitions fitted with laser guiding devices. The T-80 U can be fitted with various types of defensive aid systems such as the Kazt (Arena) Tank Active Defense system and Reactive armor blocks as with the T-80BV.

As with all DML kits it is molded in a light gray plastic, a set of multilink tracks are included as well as a decal sheet with many options to model different vehicles.

The kit went together rather smoothly while following the detailed instruction sheet. A few problems arose while fitting the upper and lower chassis but nothing a little sanding or a strategically placed camo netting or tarp can’t fix. The rear hull mounted gas tanks are a chore to set into position but a little time and patience can fix that.

The 12.7mm gun mounted on the commanders cupola is a model in itself requiring a modeling session all it’s own but when finished it looks great.

While the detail on the kit is excellent it is missing a few small extras that can make a real difference for instance : On the real tank there is a lens cover over the turret mounted searchlight – not included in the kit I made one out of a paper clip and lead foil with great results. Also a cable bundle located on the side of the turret by the loaders’ hatch absent on the kit can be recreated by a small section of heated styrene rod and lead foil. Thirdly the gun mantlet is covered by a thick leather type material on the real tank ,this can be copied by using tissue and diluted white glue.

I painted my T-80U in the standard camo scheme adopted in 1989 for all Soviet vehicles using Polly S colors, Soviet Sand ,Dark Green ,and Midnight Black. The tracks were painted Black then washed with a liberal amount of Rust and highlighted with Burnt Umber . I then dry brushed the entire tank with a combination of Tamiya Buff and Dark Green with excellent results.

The Markings on my vehicle represent a tank from the 4th Guards Katemirovets Division based in Naro-Fominsk outside of Moscow as it would have appeared as it rolled into Moscow during the failed Communist Coup attempt in August 1991.

I draped a moist tissue over the 12.7 NSV gun mount to represent a heavy tarp and laid camo netting across the turret mounted snorkel because Russian tanks traditionally travel light so you won’t find many packs and gear attached to the outside.

The T-80 U represents the culmination of Soviet Armored Technology to date and is compared to be at an even footing with it’s American counterpart ( M1A2) . Perhaps the T80-U will best be remembered for it’s role in the failed Communist coup much as the T-34 tanks which took part in the battle for Berlin in 1945.

To conclude in the words of Tom Clancy “It is wise to know the ways of one’s adversaries.