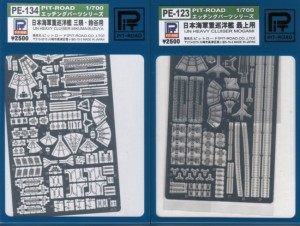 In 2002 Tamiya released a brand new tooling of their popular 1/700 Mogami aircraft carrying cruiser. This new Mogami was light years ahead of the old mold, taking 1/700 injection molded ships to a new level of detail and accuracy. That release was followed up by a much anticipated kit of Mogami’s sister Mikuma, which was sunk in the aftermath of the epic Battle of Midway, after the two ships collided. A newly tooled version of sister-ship Suzuya came on the heels of the earlier releases. Tamiya has now rounded out the class by releasing the Kumano in her early, 6 inch gun, fit.

I was fortunate to pick up both a Mogami and Mikuma at basically 1/2 price from a gentleman thinning his collection on-line. Both of these kits are outstanding, and are natural candidates for the addition of photo-etch. While these models have been upgraded, most of the photo-etch on the market seems to be geared towards the earlier tooled versions of Japanese warships. Pit-Road has remedied this with the release of two photo-etch sets, PE-123 for IJN Cruiser Mogami, and PE-134 for IJN Cruisers Mikuma/Suzuya. 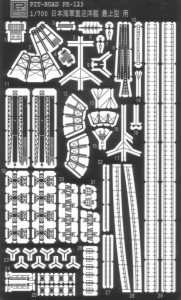 PE-123 is specifically for the Mogami in her aircraft carrying cruiser guise. The stainless steel set includes a new mast, antenna’s, bridge windows, searchlight platforms, ladders, aircraft cradles and catapults. The instructions for this set – while in Japanese – are self explanatory and extensive. They not only show you how to assemble the pieces, but where to place them on the model. The only item they don’t cover are the railings. These are molded with individual stanchions, so I’ll probably replace them with railings from one of the other manufacturers.

PE-134 is for either the Mikuma or Suzuya kits. Included on the stainless steel fret is a new mast, antenna’s, replacement anti aircraft gun barrels, ladders, bridge windows, aircraft cradles and catapults. No railings are included. Where the instructions 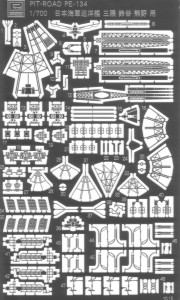 for the Mogami set are well done, the instruction for this set are lacking. It gives instructions on how to bend the photo-etch parts only, but no guidance as to where to place them on the ship – a major shortcoming.

Conclusion: Both relief etched frets are of high quality. The stainless steel looks durable and forgiving but not too heavy. The instructions on the Mogami set (PE-123) are a plus, but I would have liked the set better if it contained a full set of railings with the solid bottom piece, instead of individual stanchions. The Mikuma/Suzuya (PE-134) set is missing railings and the instructions are weak compared to the Mogami set. I highly recommend PE-123 for the Mogami, my dislike for the railing stanchions aside. I can only recommend PE-134 for the Mikuma/Suzuya with reservations, due to the poor instructions and total lack of railings. I purchased my sets from Hobby Link Japan, where they list for 2,500 yen. 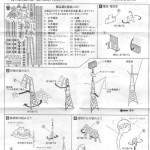