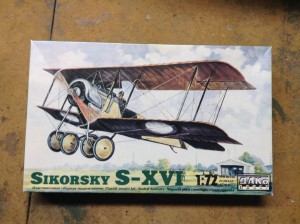 Igor Sikorsky designed the S-16 in 1915, believe it or not, as an escort fighter for his famous Ilya Muromets bomber. It was a single pilot aircraft although some did have two side by side seats. The S-16 was armed with a single Colt model 1895 machine gun and utilized a Lavrov synchronizer for firing through the propellor arc.

The Russian-Baltic Car plant received a contract in September of 1915 for 18 S-16 aircraft and by the middle of 1916 had built a total of 34 aircraft. The S-16 was used by various factions after the Russian Revolution with the last being removed from service at the end of 1923.

This model was one of those “I never knew they made a kit of that” finds at a MosquitoCon a few years ago. Better yet, it was only five bucks!!!!!!

The model was made by Denkoplast, a company I never heard of and contains 34 parts 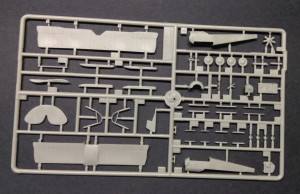 on a single sprue of light grey polystyrene. The model is very well done, its molding reminding me of a Roden kit.  The airfoils of the wings and tail assemblies are very thin and within scale. The cockpit is a little basic but contains a forward bulkhead with instrument panel, a nice rudder bar, a great control wheel (love those big control wheels!) and a well detailed seat. There is no sidewall detail but this can be easily made.

The kit contains a well detailed Colt 1895 machine gun along with its ammunition box and associated feed chute. The LeRhone rotary engine is basic but has nice cylinder detail and with a little work will do just fine. The propeller is also very well done with nice mounting boss detail.

An interesting part of this model is the landing gear which uses four wheels or a set of skies. The skies are exceptionally detailed and compromise four separate parts. To me 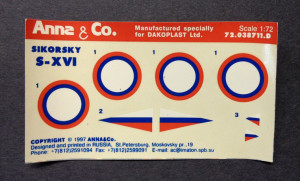 these skies would be worth the five dollars I spent for the kit.

The cabane and interplane  struts are very thin and great care will have to taken when removing them from the sprue.

The decals are made by a Russian company called “Anne & Company” which again, I’ve never heard of.  They are well printed, with vibrant color and appear thin, however as we all know, looks can be deceiving. I’ve got a nice sheet of American-Gryphon Imperial Russian markings in case these don’t work out.

The instruction sheet is basic but does the job. It has a great rigging diagram for the wheeled landing gear but strangely does not cover the rigging for the wings or tail surfaces. 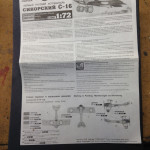 All in all, this is a great model of an obscure World War One aircraft and best of all it’s in the “One, true and righteous scale”.

But the best is yet to come, at last years MosquitoCon, I found a second S-16 kit for five bucks! Now I’ll be able to build both the wheeled and ski version! If you see this model BUY IT, you will not be disappointed.

I hope everybody had a great Holiday season and my best wishes for the New Year. Now get busy and start building something!!!!!