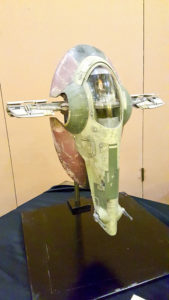 On the 27th of August I made my way to the Mariott in Whippany, NJ, for the annual JerseyFest show. Walking into the contest room tells you this isn’t an IPMS event, as it’s filled with mostly large scale figure models, horror and fantasy being the predominate themes, but sci-fi hardware was represented as well with several impressive studio scale ship builds. The Bandai Star Wars kits were also well represented by several builds. Dinosaurs, mecha, and superheroes rounded out the display. I’d guess there were maybe 200+ kits on display, but I’m terribly bad about estimating such things.

The dealer’s room had a lot of resin. Again, large scale figures reigned supreme, but sci-fi hardware and dinos were represented as well. One of the more interesting aspects of JerseyFest are their seminars and classes. I wasn’t able to take a class this year due to work conflicts on Friday, but I sat in on two studio-scale modelling presentations yesterday and took away a lot of good information.

Overall, a really great show and good time. Met some new people, came soooooo close to buying a studio scale B-Wing kit that I still get the shakes thinking about it, and picked up some great tips and ideas. My photos below. As always, I made no attempt to photograph everything — as I have to do that for MosquitoCon every year — so I shot only what really grabbed my eye.

Links to photos from the show. 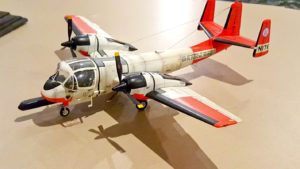 The August meeting was held on Friday the 12th, with a good attendance. The contest was Civilian Night, and Dan Spera took the honors with his Roden Mohawk in 1/48th scale.

The IPMS Region 2 show in Virginia Beach and MarauderCon were both discussed, as was various other club business. We’re meeting next month for Sci-Fi night, and dinner will be served!