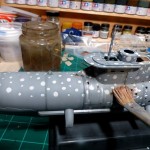 Marc Rocca will present a workshop on the oil paint dot filter technique at the February meeting. You can see the technique in-progress to the left on his current build, a Type XXVII/B “Seehund” Midget Sub, Bronco 1/35th scale. (He’s also doing an online build of this subject on the Modelwarships.com website HERE)

Marc will also touch on rigging, using a new method to make finer strands of the popular rubberized EZ-Line. 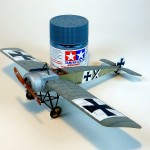 A review of the 1/72 Dakoplast Sikorsky S-16 has been added to the Reviews section.

The January 2015 newsletter has been added to the Newsletter page.

The Upcoming Events page has been updated with flyers and/or links for the upcoming Celebrate Modeling day on January 31st in Fairfield, CT, and for the upcoming Replicon 27 on April, 11th, in Freeport, Long Island.

A page for photo links to our offsite hosting for large photo features has been added to the Photos page.

And, finally, for those who are counting the minutes until MosquitoCon 24, we’ve added a counter to the Home Page that counts down along with you. 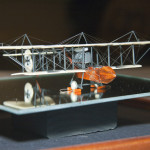 NJIPMS kicked off the new year with WWI night. There were plenty of models on the table, mostly aircraft, but few figures and pieces of armor did make an appearance as well. Maybe we can get some ships for next year?

Jon, the contest coordinator, mentioned that most of the meetings this year are open for sponsorship. As of now July is tentatively “North Africa” night, and November will be “Number 13”. North Africa is fairly self explanatory, Number 13 has to do with, obviously, the number thirteen. If it has that number on it (race car, building address, hull number, fuselage code) or it participated in the Battle of Friday the 13th at Guadalcanal in 1942, then it qualifies. 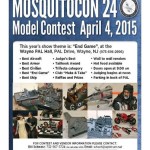 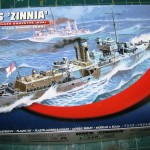 Martin J. Quinn has supplied a review of the HMS Zinnia, one of the recent releases in the small ship styrene realm. This is one of those subjects that ten years ago no one ever expected to see in styrene in this scale. It looks like a winner. Click HERE for the review.